In the vague words of Lisa in Stir of Echoes, this top is practically done, which is to say that practically means not really...

I gave you all a sneak peek of this top, and so now I present you: 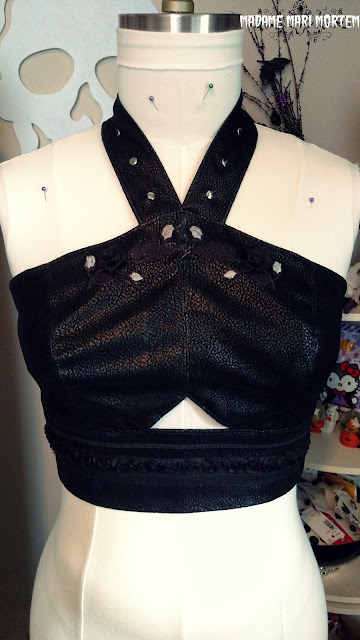 The top is done, sans a closure to the straps-- hence the practically bit.
This is going to be a long one, so get comfortable. 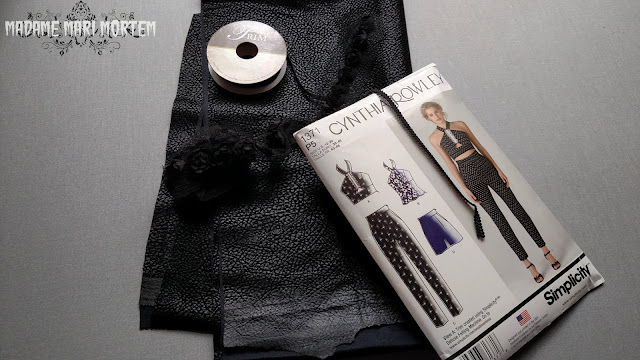 For this project I used semi old stash, I acquired this faux leather/suede material during my time working for Jill's Fabric & Design in Carlsbad, New Mexico, which at this point makes it a year and a half old stash. Good enough, eh?

I can't actually recall when this pattern was purchased... I now have several Cynthia Rowley by Simplicity patterns, and most of them were purchased in large hauls when I was after another pattern in particular. It's funny because the pattern images and samples of these patterns are all super hideous. Just ugh, why? I know that I bought this pattern for the pants and shorts because up until very recently the thought of wearing crop tops would make me physically ill-- I have that little confidence in my belly's appearance. 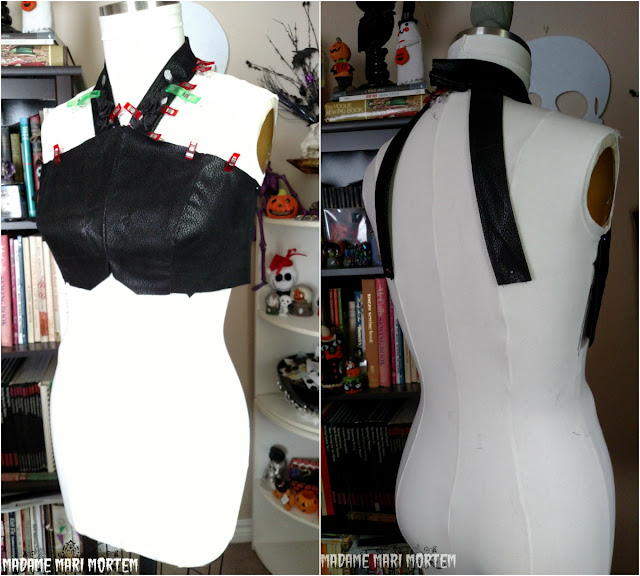 I cut out a size 12 in view A. It's worth it to note that this material is not on the suggested fabrics for this pattern, but it worked well because of the nature of the drape; it's not too stiff and not too soft.

In the sample I gave you all, it would appear to be hella short, and have slightly different design features... but I was mucking about at that point; I didn't know what I wanted to do. 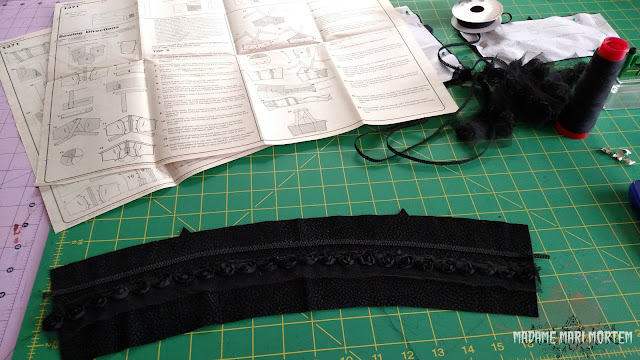 I began playing with the myriad of trims I buy and for whatever reason never use, hahah...
The trims and spikes for this top were purchased at Hobby Lobby when they have their bogo trim spools sales or 50% off; they're already super cheap, so the sale makes it a crazy good deal. The rivets and appliques were bought from Joann's. 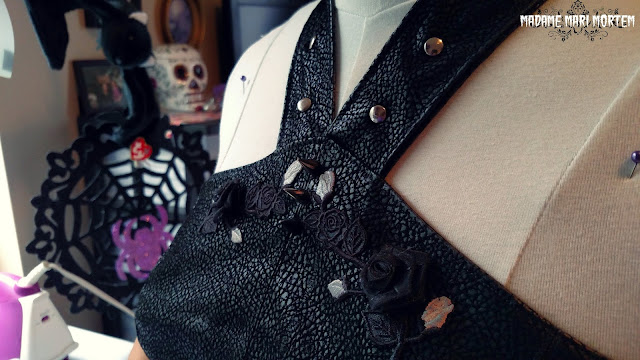 I must confess something at this point... this was my first time using rivets...
It scared the hell out of me. Luckily I had several sizes that I had purchased earlier since I was hoping to use them in a purse I was planning on making, because this could have made me swear off of them. 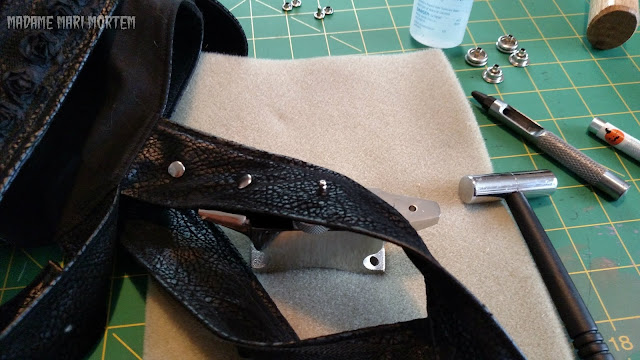 If the post is too long, then it might come loose, if it's too short it might pop off-- scary stuff! I gave them a dot of fray check to act as reinforcement, just to be sure heh! They turned out alright! 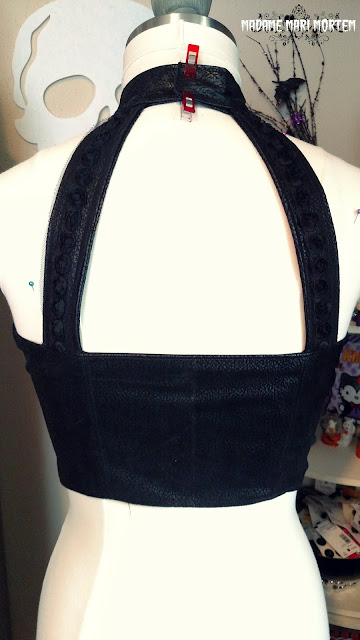 What didn't turn out as planned is the back closure; this material is too stiff for hook and eye, I wanted, no, needed to use spring snaps. Anything else would look poopy. After eight pair trials, I could not keep from bending the post off to the side. It leads me to believe that either A) I am just terribad at applying snaps, or B) the snaps I currently have are too large for this material, I did buy them for handbag making after all. 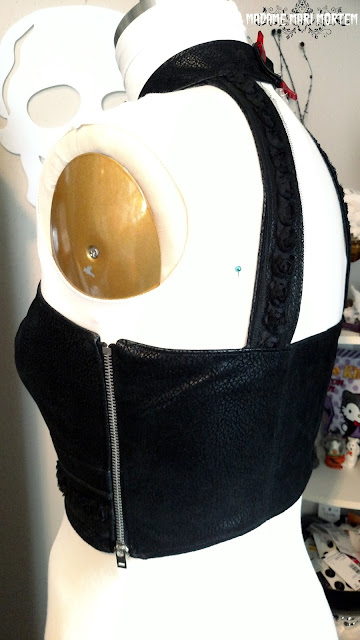 The pattern calls for an invisible zipper, which just wouldn't work with this material; the amount of pressure of the material, it would be an inevitability it would break. Besides, this was a great opportunity to make it a design feature as well. As a side note, this is a recycled zipper from the pocket of a pair of pants I bought at the thrift store to gut for notions. Woohoo! 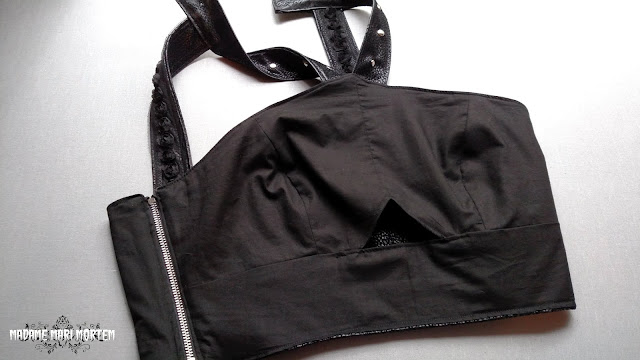 One of my favorite aspects of this top is the fact that I was able to make the inside look just as clean on the outside as in; considering all the seams and hand stitching I needed to do on this. I did however overlook a zipper flap, I might go back in and add one but I have tried it on and didn't notice the zipper in the slightest. Must be the location and size of it.
I'm getting quite obsessive about having my work as clean inside, just as out... weird. That's something they don't tell you, as you get further into your sewing progression, completionism becomes overwhelmingly strong; it happens in gaming too... 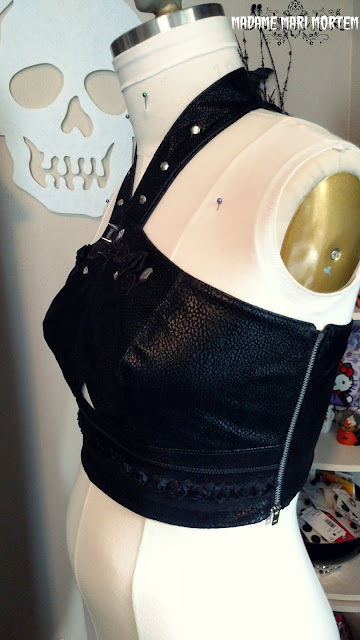 So that's it! When I get some proper fitting snaps in there, I shall wear it in a completed outfit hehe.


Till next time! Spooky ya later.

It has been a while, hasn't it. 4 months said out loud does not sound like long at all, but quite a lot has happened in that very insignificant blip in the cosmos...
Well this insignificant blip has certainly taught me a lot about myself; too much to get into for now, so let's appreciate this "rest stop" on a journey of self discovery I have inadvertently taken.

Ah, such is the mortal coil-- growing pains never stop, no matter what your parents say (they should really know better than to spread such a fallacy, tsk tsk).
Thankfully, I am a person with a decidedly cathartic outlet; a hobby... or more specifically, I have my ability to sew to ease the ennui.

I am progressing nicely in my goal to change the fabric I work with from spooky cute to spooky decadence; it's a much harder transition then once anticipated since Halloween prints pluck beautiful notes on my heart strings. However, I haven't done good by my to do list of patterns to sew, I seem to have found myself yet again at a deviated point...

I stitched up yet another skirt, because they're quick and I am very much lacking skirts with the right length for the weather here in Texas which has been irritatingly humid and hot... or just wet. No in between. 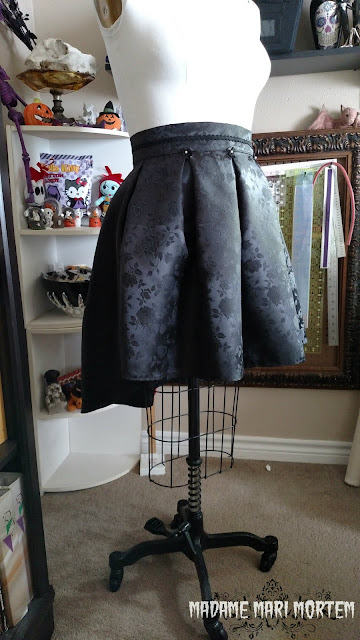 Unfortunately I didn't use any stashed supplies or patterns; these are all recent purchases made in the last month or so. This is McCall's 6706, and I used a black brocade satin.
I used View C which is the hi-low hem option, and cut out a size 18. 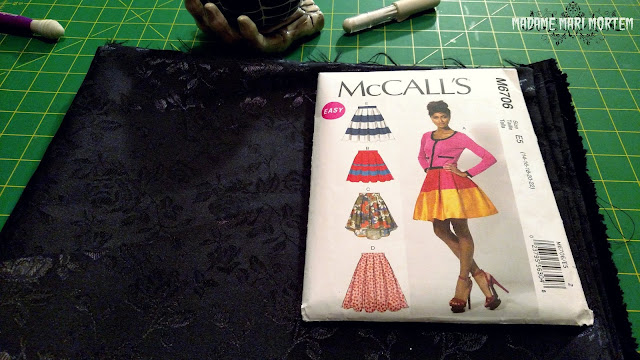 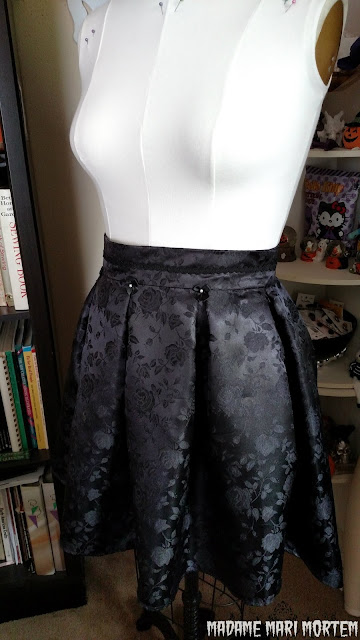 In the above perspective you can take a gander at the side zipper and hook eye opening of the waistband; I was particularly happy with how it turned out because they came out exactly as intended-- almost seamless. The zipper is lapped, and originally I thought I could somehow get away with making it an invisible zip since I hate doing lapped zippers lol, but it just didn't work. 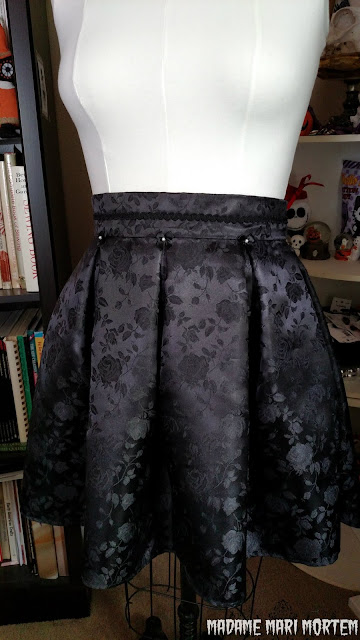 The way the box pleats are drafted into this one is designed so the side seams and consequently the zipper lie on the inside of them, thus becoming hidden. My initial experiment with the invisible zipper revealed one little flaw in the instructions, wherein they say to stitch up to the dot-- the dot being the point where you will insert the zipper. If you're not careful at the insertion of the zipper which comes before creating the pleats, that seam can create a very wonky look to the entire pleat. It has to be as close to perfect to avoid looking poorly made. 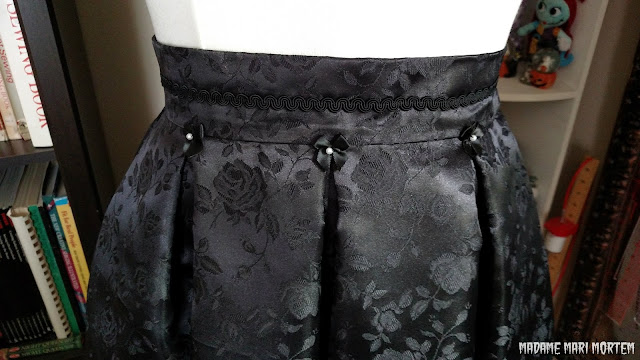 My solution to this was simple, make sure you haven't lost track of the dot, and stitch it all the way up back stitching at the dot. and continuing. Insert the zipper onto the seam allowance, as you would with any lapped zipper technique, and once inserted, very carefully pluck the seam open up to your back stitch. Voila, seamless and pretty darn near to perfect. 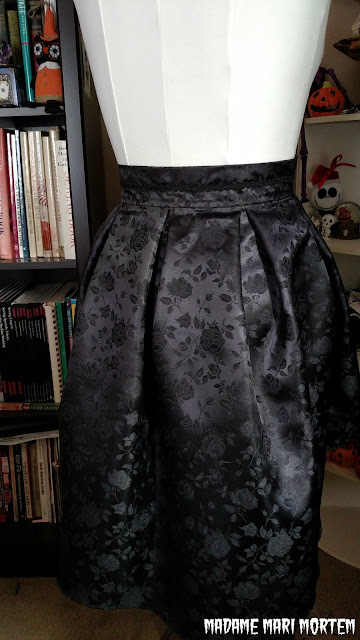 The skirt has fantastic body with this material-- there isn't a petticoat under there, it's awesome naturally. I also didn't go loco on the embellishments, as I was rather hoping to use this as a staple skirt; I could potentially whip up a bustle belt for this, or pair it with a very frilly blouse. To keep it in this way opens up a lot of outfit possibilities. Plus it really lets the pattern of the material to really blossom on its own.

And so my curse resides, heroes...

Hopefully I'll get around to posting about this sooner then later, but in case I don't, here's a sneak peek at what is currently brewing in my creative laboratory. 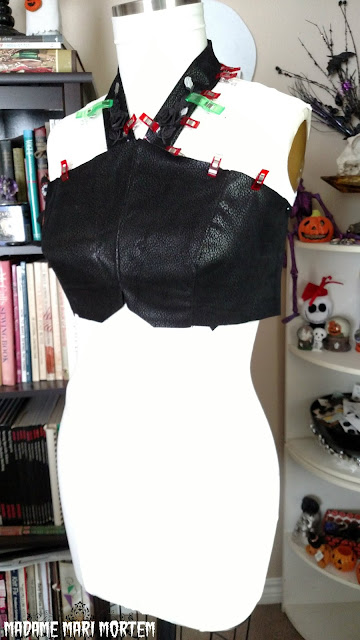 Till then, my lovely ghouls. 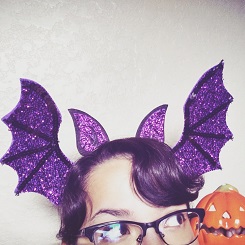 I sell on Etsy! 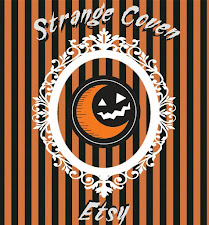 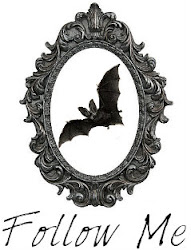 A Few Of My Latest Obsessions...